My son and his lovely girlfriend are away at college, currently in their junior year. My son Grayson has lived on Kauai most of his life and his girlfriend was born and raised on Kauai. They've known each other since they were very young and started dating when they were sophmores in high school.

It was a big surprise to us when they announced to us (as high school seniors) that their college of choice was not on nearby Oahu, but in the cold, cold Northwest! Where it snows! But they've lasted and thrived and LOVE their school, even though it's taken some effort to get used to the cold.

I occasionally send them care packages like the one below: 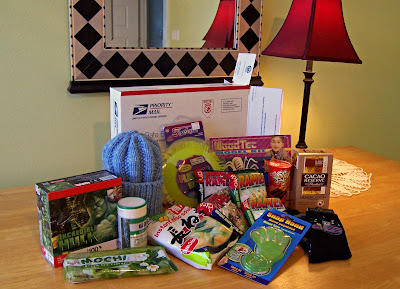 Recently, it was Angela's birthday, so I knitted her a hat. This one looked super warm:

The pattern was in Paton's "Street Smart" booklet, the same pattern book as my "Must Have Cardigan." I knitted it using two strands of super-soft Malabrigo. 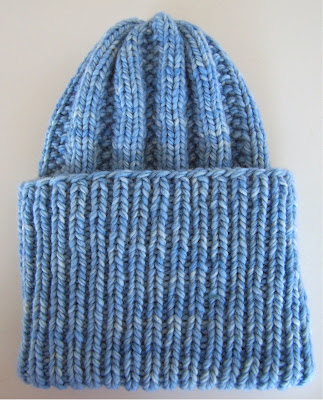 This hat took almost two skeins of Malabrigo! It's quite a thick hat...and very long! 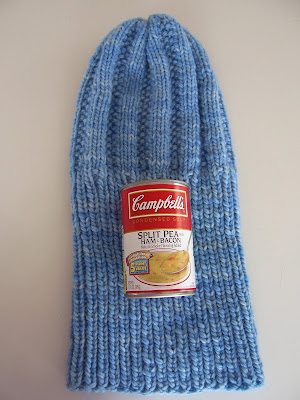 The long part folds up over ears for extra warmth.

Let me tell you, I am so in love with Malabrigo! This was my first experience with it--I mail ordered it after I heard other people extol the virtues of this stuff. I was not disappointed. I think it's my favorite yarn EVER. 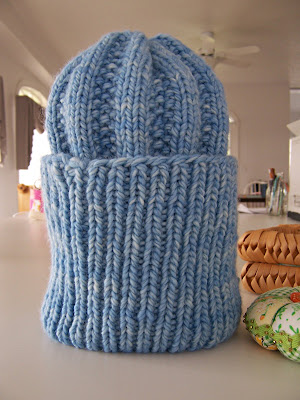 See? It's so thick and lovely, it stands up by itself. I hope she likes it!

This is sweet Angela, helping me make a quilt last year: 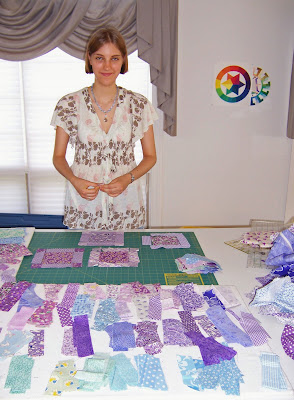 I think it will look nice on her, don't you? She's such a lovely girl. I couldn't have chosen a better friend and girlfriend for my son. And she helps me quilt!!! I know it's a cliche, but it's like I gained a daughter. One who likes to sew! I am very lucky...oh...and I guess my son is, too.

Angela is not only a very smart girl, she's a talented one, too. She has a wonderful imagination and is an amazing artist. Here is a portrait she did of Mr. Bigglesworth: 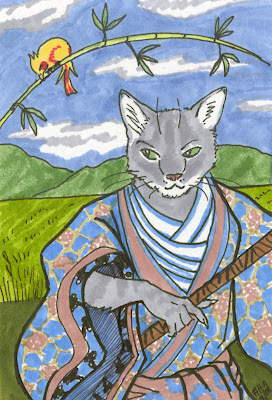 He looks handsome in his Japanese setting and garb, don't you think?

Grayson and Angela are so lucky to get care packages from Hawaii. (As you said, gotta love those flat rate boxes!) I'm sure you could predict my next question. When do we get to see a picture of the quilt you and Angela made?? Nice hat, by the way. I'm sure she'll love it, unless she is worried about hat hair??

Aww... how sweet of you to send Angela and Grayson care packages. I'm sure Angela will love her new blue hat... looks very cozy.

Happy Birthday to Angela and her drawing of Mr. Bigglesworth is adorable.

I want to see that finished quilt, too. I love the color of the hat and it does look very cozy and warm! Good drawing of Mr. Bigglesworth and it looks like he has it in for the birdie that is behind him!

I love reading about knitting as well as quilting, being a wannabe knitter who's taking lessons. I know zip about various yarns so I'm taking notes. The hat is so cute and looks quite warm which sounds exactly what Angela needs in that NW climate. Her artwork is stunning. Thanks for such an interesting post.

Angie will love the hat. It's such a pretty blue and looks nice and warm. :o)

Oh! The portrait of Mr. Bigglesworth is perfect! Looks like she's a very talented gal...and how great that she quilts w/you!

Angela is really talented! I am smiling, when reading your post, because I always send everything possible to our daughter Minna living in New Zealand! We mothers.... Two more days working and then to Helsinki Handcraft Fair and one week holiday! I can hardly wait....

She is a beautiful girl and very talented. Mr. Bigglesworth should be proud of his portrait.

I'm sure they love receiving those care packages. I know I did when I was in school and my mama was only 2 hours away.

I LOVE the portrait of Mr. Bigglesworth! She is really, very talented!

Oh, and I love the hat! I'm up here is the COLD Northeast... I may have to try that yarn...it looks WARM!

Those flat rate boxes are the best. I'm a master at stuffing them to the gills *s*
How fun to have a quilting budding . . . . and one that you can knit for. I'd say this is a match made in heaven.

What a great care package! I love that hat. I'm make a sweater out of malabrigo right now - it is lucious stuff. Lucky you (and your son) that he picked such a great girl.

I love sending my kids silly packages! Wow, Angela is one talented artist!

Malabrigo is great, and I love your hat!

i remember the opening for caryl's show at the museum and we were looking out the little kitchen window at angela, who was "budding" into a young woman, and teasing her mercilessly...hard to believe they are jrs. in college already!!!! well, bernie will be 40 in august, how in the heck did that happen?!! i like the drawing.

YAY for sons who pick out good girlfriends & potential daughters-in-law. (We mothers of sons have to worry about these things ... after all, we have to make sure they pick out somebody who won't mind changing our Depends for us in our "golden years"...)

....and what a great hat you knit for Angela !!! I like the way it doubles up over the ears for extra warmth ....OR if you leave it all unrolled it looks like it could double as a really soft and cozy (and pretty) sleeping bag! (I'm just kidding , of course .... it's a beautiful hat!)

How wonderful is Angela! Reminds me of how I feel about my DIL... and she and my son live far, far away too. Kids. There should be laws about them living so far!

You know, I am incredibly homesick for ku'u one hânau, the sands of my birth. But I now live in the Pacific NW and love it... it's so green, there's so much water everywhere, and the countryside is beautiful.

I miss the warm ocean the most.

Tell Grayson and Angela to head over to Uwajimaya (if they're near Seattle or Portland) and they will be able to get all kine local stuffs, including poi, mochi, fresh fish, sushi, and crack seed, to name just a few! There's also Fubonn in SE Portland.

I'm in that cold, cold northwest and it's a definite change in climate and weather! The hat you made for Angela is wonderful and perfect for this weather! She is quite an artist as well! I'm sure Grayson and Angela will really appreciate such a wonderful care package!
Cheers,
Dionne