Welcome back! It's time to leave Kapaa and head toward Koloa. You ready? Good! 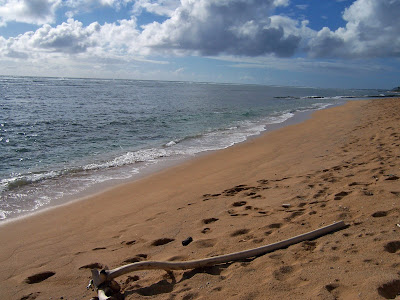 I hope you don't mind, but we have to stop at the post office to mail some pattern orders out. You've been to the post office before, so we won't take any more pictures there for your photo album. However--right next to the post office is Burger King where we can grab a quick cup of coffee for the road. Whaaa? You're hungry again? Well...I think you should wait until we get to Koloa because I'm sure you're not tempted by: 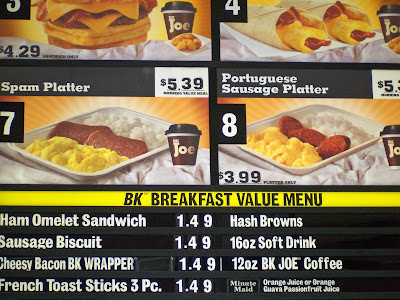 The Spam with rice platter? How about Portugese Sausage with rice? No? We have some local favorites that you might not find at Mainland Burger Kings. Our McDonald's here even has saimin! And taro pie!

I'm just mentioning this. This is not an endorsement of said food. Don't come to Hawaii with false Spam expectations. It's still Spam, whether it's Hawaii Spam or not. Did you know that Hawaii is the biggest consumer of Spam? People buy it by the flat here. They even make a kind of Spam sushi--a piece of Spam rolled up in rice and seaweed. I'm sure you'll want to try that...NOT!

Enough Spam talk. We're going through Wailua, Hanamaulu, Lihue, and Puhi. Past Puhi, we've turned south off the highway and onto the Tree Tunnel road. This "tunnel" is so named because the trees used to be so large and lush that they came together overhead and formed a dark tunnel for miles: 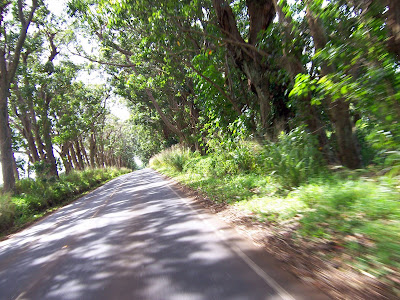 Unfortunately, Hurricane Iniki devastated the tunnel in 1992 and it's STILL growing back, even after all these years. The branches are just starting to touch in the middle again--I'm not sure how many decades more it will take to restore it to its former glory. I rolled down the window and stuck my arm out with my camera to take this picture. There's no good place to stop in the Tree Tunnel. Sorry about the motion blur!

Here we are at Koloa Town! Old Koloa Town, that is. 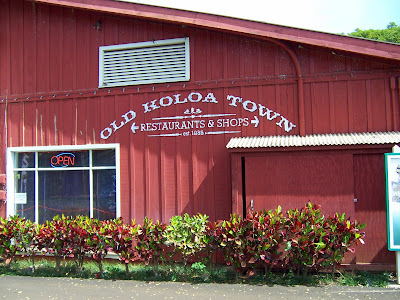 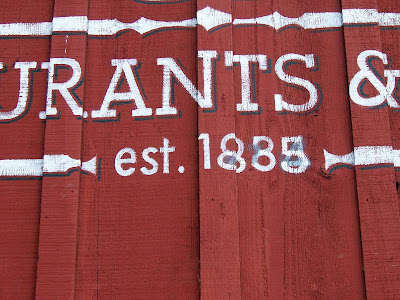 Apparently, there is some debate about this. It looks like they let anyone with an opinion and a paintbrush have a go at it. Anyway...it's old.

I know we just ate, but since I'm ALWAYS thinking about food, I want to go into my favorite little place to get a bento for later: 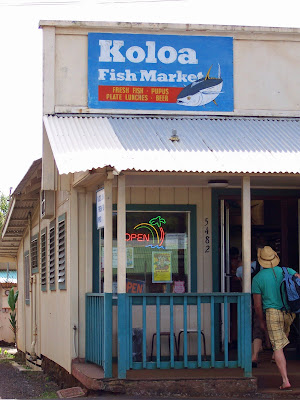 I LOVE this place. Holy cow, I love their seared ahi. If I lived closer to Koloa, I would eat it every day. You can order from the deli window, or they'll prepare a fresh plate lunch on the grill back there. I love the color of that marlin back there! I don't know what color marlins really are (or is that a big tuna??), but "Marly" back there is one pretty fishy. 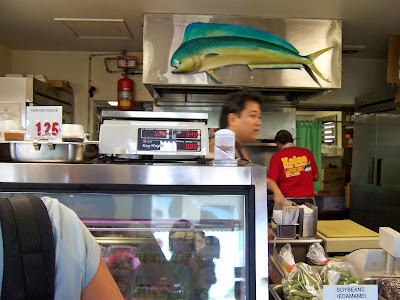 I would like to paint my living room the color of that marlin/tuna/fishy. Okay...what would you like? They have all kinds of squiggly squirmy food in this deli case: 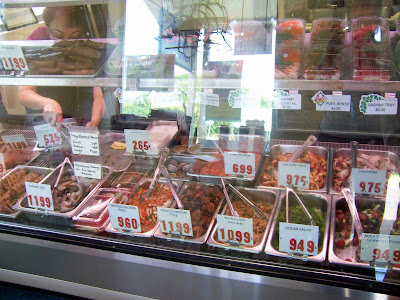 I get lots of Mainland people who used to live in Hawaii emailing me that they crave these foods so much! So...this picture is for you, ex-Hawaiians that now live in faraway places. Enlarge the picture so you can see your pokes, sashimis, smoked marlin, tako. Happy drooling.

For those of you who dislike seafood, proceed to the next picture. 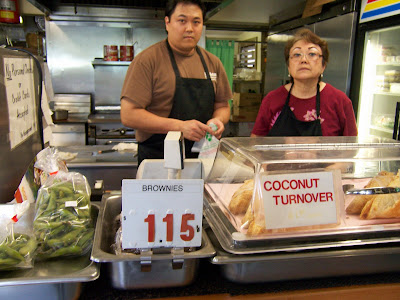 Well, maybe skip this one too. I meant to take a nice picture of these two as they are really nice people...but something happened to their faces when I whipped out my camera. See this? This is called "Stink Eye." Meaning that they didn't probably want their picture taken...but oh well, too late. When I told them why I was taking their picture, they smiled again...sort of. Maybe if I buy one of those coconut turnovers, they'll forgive me.

We've got our bento for later, let's look around Koloa a bit. Let's look UP the street: 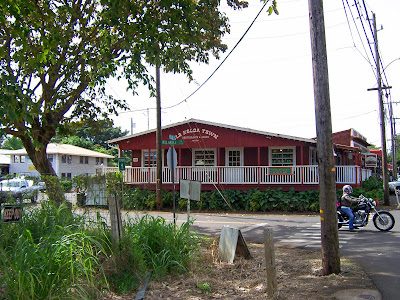 Lots of shops! And DOWN the street: cafe, realtors, public library. 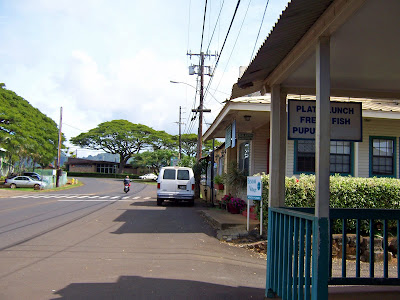 UP the street we go. There are some nice shops and museums this way. Clayton sees a ukulele store and MUST go in. It's sort of like a fabric shop for men, I guess. Except there's no fabric. Just a lot of different ukes. 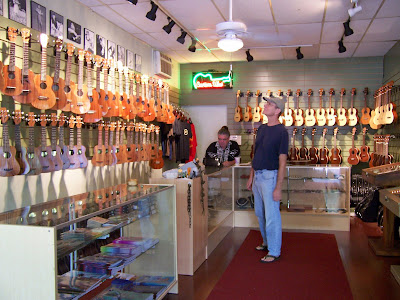 He can spend some time in here--I'll go out and sit on the porch with these happy people. Here it is, mid-winter, and they're in shorts eating Lappert's ice cream outside! They probably flew in from somewhere really, really cold--and this is heaven for them. 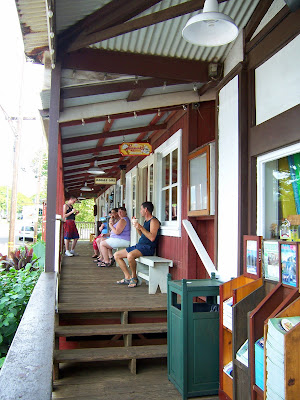 Sitting on the porch and eating ice cream is nice, but my idea of heaven is a little bit different.

I dream of home, and my latest project under construction: 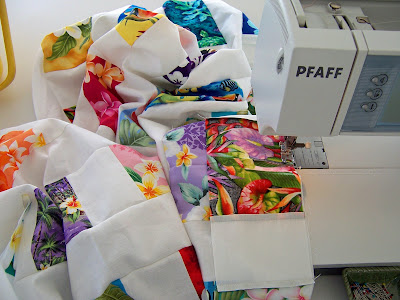 Next up, more of Koloa town, then Poipu. If I can pry Clayton away from the ukes, that is...

Could you send a couple of those coconut turnovers to Minnesota?

I love fish any kind of fish. The tour is so wonderful, thank you for taking the time.

Oooh, wish I was sitting there outside the uke shop eating ice cream.....I'm bundled up here in Chicago instead--blah! Thanks for sharing your island with me!!!

You are the best tour guide...

I love fish and all kind seafood! Your dream is very flowerish and light. It makes me think of summer... I can hardly wait to see your next pictures!!!

Still enjoying the tour. We loved the tree tunnel! We didn't realize that it should be more tunnelly. LOL Your home project looks great - so bright and colorful.

FYI, the fish is a dolphin. (Flipper is a porpoise not a dolphin)Marlins have a bill like a sailfish.And tuna, well that's something else altogether.
I live in South Florida and my husband does alot of fishing.

Thanks for these posts...they sure look better than New England in February! I'm glad that you are back to posting...I missed you during your hiatus.

Now I'm hungry for breakfast AND a vacation!

Sitting outside the uke shop, eating ice cream and wearing shorts... AND smelling that fresh Hawaiian air ~ that is definately a slice of heaven!
Thanks for the mini-break!
Cheers,
Dionne

Nope, not a marlin. A dolphin fish, dorado, or mahi mahi. What they call it depends on where you are, but it's all the same - and damn tasty. Good fishing too.

Love the sites..I M TOTALY DROOLING the good stuff in the fish market. I'm from Kapaa, and now living in So Calif. Thankyou for sharing the sunshine, sand, beach and local food..Bring it on, Girlfreind!!!!!

What a treat to tour Hawaii with you. Sitting outside eating ice cream at this time of year seems unbelievable!
Your work in progress is intriguing. The fabrics are glorious. Are we going to see more pictures of that?

So, why aren't Lilo and Stitch in any of those pictures?????? It all looks so beautiful, and WARM!!!!

I'm soooo glad that you are back blogging.......I depend on you for my "aloha refill". The island field trips are fun. I'll take Lomi Salmon, smoked salmon poke, even spam sushi, but most of all Lappert's coconut ice cream!

Trying to live aloha on the mainland!

Thanks for the tour! I can't wait to see more of the quilt you're working on. It's beautiful.

you know I just had ice cream but.....I want to have it over there on those nice benches..Darn. Maybe one day.

nice to see old home spots but sweetie a marlin...come on, remember marlins have those long pointed bills. that is a mahi mahi and a bull by the shape of the head. those colors are not misrepresented when they come out of the water and land in the boat. some fish are hard to believe their coloration is so beautiful.

I'm going backwards on the tour. I saw spam, poke and saimin... and I knew I could go not pass this post!

I never had Spam until I moved to Hawaii. Now I make Spam Musubi as part of our Christmas day food. Once you get Hawaii nei in you, it's hard to get it out. When we moved to the mainland, I ordered a Sprunch at McDonald's.... and they of course gave me stink-eye!

i wasnt harrassing you about the fish just pointing out a little fact. you didnt comment on victoria at the quilting frame :-)

Hey, i'm giving away some fabric on my blog this week, check it out!

Thanks for the tour. It takes me back to when I visit with my friend in the summer. A great reminder today. I also love your postcard quilt.