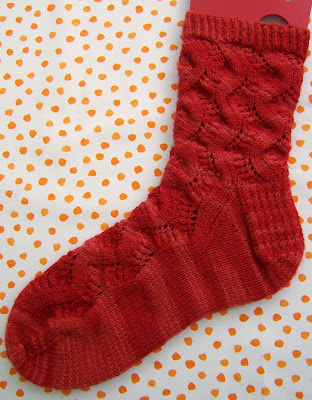 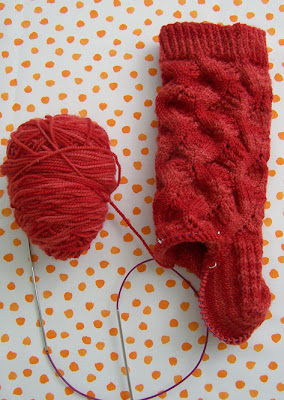 This is the sock that never ends. I've been half-heartedly trying to work on this sock now for four months. This is "Spring Forward," a free sock pattern I downloaded from Ravelry. I'm not sure why I'm not finishing it. Perhaps because I'm not fond of this Shibui yarn, or perhaps I don't like the length of the completed sock. Whatever it is, I am stuck, stuck, stuck, motivationally speaking, just past the heel of this sock.

But being stuck alone is not enough to make me mad at this sock. No. Something far worse has happened.

I'm a one-project-at-a-time woman. I've always figured that if I didn't love a project enough to work on it--if I had to go traipsing off onto another project just to get un-bored--that I should figure out what was wrong with the one that had stalled me and fix it. Make it exciting enough to work on again. Sort of like marriage, you know? You just can't go calling up Brad Pitt or Gerard Butler because you're sick of your own husband! Even if he does generate too much laundry or leave wadded-up paper towels on the kitchen counter every hour on the hour. Ahem.

But being promised to a duplicate of a project that barely entertained me the first time is agony! (Imagine having your husband's identical twin come to live with you on laundry day. He's also brought his spare roll of paper towels.)

So...for the first time in my knitting life...I'm thinking of being unfaithful. Why? Because Daniel Craig showed up my mailbox today:

Swoon. Mittens...Mostly Mittens (with a few adorable hats thrown it) by Charlotte Schurch. Charlotte has already stolen my heart with her fantastic sensational sock books; now she's tempting me with mouth-watering mittens! 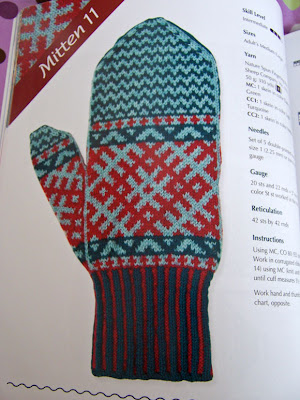 I don't know if I can stand it. Temptation, thy name is Mitten #11. 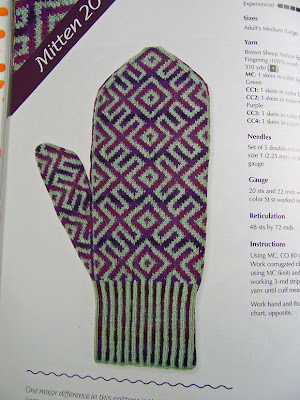 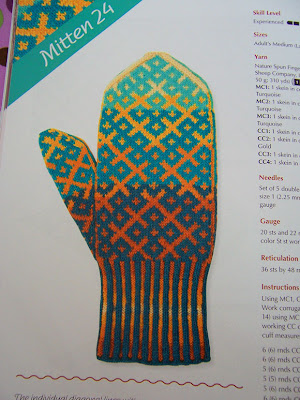 Nope. Mitten #24 has stolen my heart. Sorry, Spring Forward socks. It wasn't you; it was me. I tried, but I couldn't resist the call of Charlotte's beautiful mitten patterns. Her instructions and techniques are clear and concise, and her projects are divine. You couldn't help it, red socks; you were just plain red. Right now in my life, I need a rainbow: 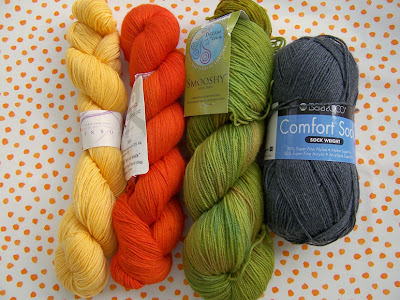 Sigh. What will my friends and family say? 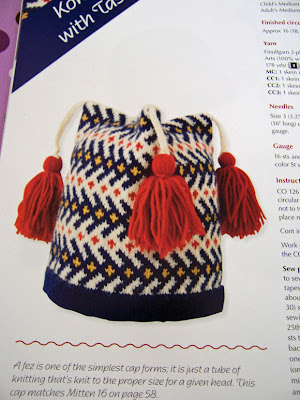 I know! I can distract them with this uber-adorable fez!! How could they be mad at me if I'm wearing this???
Posted by Lisa Boyer at 4:04 PM 20 comments:

My FAVORITE Hawaiian Song EVER

I've been meaning to post this for a while now--my favorite Hawaiian song EVER. Truth be told, I'm not a huge fan of Hawaiian music, but this song gives me goosebumps every time. The song was written by a woman and the words have something to do with the beauty of ocean life. I was very happy to find an accompanying video on You Tube! I think the song and the video are very beautiful. Enjoy! 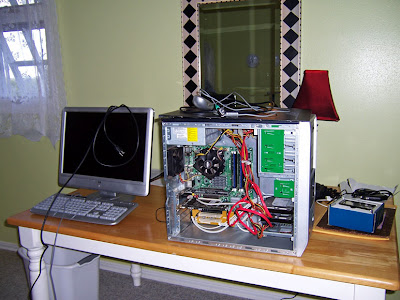 I wish I'd taken more pictures of this little quilt before I donated it. I didn't like it very much at the time, but now that it's gone, I'm liking it much better!

I was inspired by a book I saw at Border's. A full-sized quilt that looked very much like this one was on the cover. I thought about the book for a couple of days, went back to purchase it, but it was gone. I didn't even get the author's name or the name of the book! So here is my attempt at reproducing her quilt from memory: 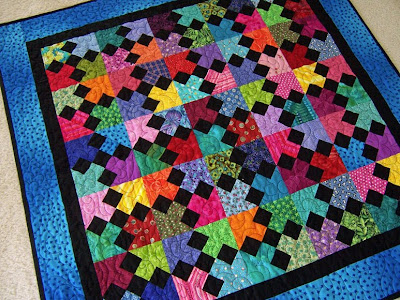 My apologies for not being able to give credit to the wonderful person who designed this quilt! I like the pattern; I think I just fell out of love with the quilt during the making because I'm not used to staring at these intense colors. My eyes needed a vacation before I could appreciate it again.

Does this quilt ring a bell with anyone? Remind you of any quilt books you have?

I'm in a crafting lull right now. I think it's Post-Wonderful Vacation Syndrome. You know how it is...you go on vacation and it's really really great, then you come home and have to do this re-entry into your life. There are bills to pay, messages to answer, groceries to shop for, pattern orders to fill--it takes me at least three weeks to get back into some sort of routine. Unfortunately, I feel like my brain is moving too fast to sit down and quietly sew pieces of fabric together, or work string into doilies, or knit yarn into socks.

Oh...and part of the life re-entry is to get sick, too. You have to have the re-entry flu--you know the one you actually contracted at the first airport before you even got on the departing plane--but refused to get sick on vacation? Yeah, that one. Fortunately, I'm over that one, but now I'm onto the second illness--the cold I got from being so busy and not sleeping and eating right when I got home because I was too busy catching up and suffering from the first flu. Yeah, that one.

I think, all in all, vacation recovery time for me is about three months. But since Halloween, Thanksgiving and Christmas are in that three month period...I'd say...oh...I should be feeling caught up and healthy around February? Yeah, February. Looking forward to it.

It's been quite stormy lately here on Kauai. This past Saturday, my friends braved the weather and came to my house for a day of sewing. We chatted through the heavy rain, thunder and lightning--even through the power outage we had during the storm. But alas, by early afternoon, there was talk of closing our road due to flooding, so my friends high-tailed it out of Kapaa and headed for their homes on the south and west sides of the island. This news report shows what happened on our street that day.

Our north and east shores got 14 inches of rain in 12 hours that day. The amazing thing? When my friends got home, they reported that the sun was shining where they live, probably only 10 to 15 miles away! The skies cleared by Monday, and today, we are enjoying sunshine as usual.

Lightning Storm on its Way!

It's 9:52 on Thursday night and I'm just about to turn off my computer and enjoy our first lightning and thunderstorm of the season. See those little yellow and red dots between Kauai (second island on the left) and Oahu? On the radar loop, they're coming this way, bringing lots of light and noise.

Oh, how I LOVE thunder and lightning! So much drama...so much power! It's just thrilling to me. Of course, our electricity will go the first thing, so I better turn off my computer so I don't get any unwanted surges. Yay!